Ghostemane has been making music since he was 14 years old. Coming straight out the swamp, This Alternative Rap artist now resides and does his craft in Whittier, CA.

100WW: Where did you get your name?
GM: I honestly just thought it would sound cool. I’ve sort of applied it to my personality, cuz I’m really introverted and people would say that I’m a ghost because I don’t deal with them or we would make plans and then I wouldn’t go.
100WW: That reminds me of one of your first songs. I heard it on YouTube. I think it was called Ghostemane, actually.
100WW: How would you describe your sound?
GM: It’s annoying, when I put my music on Spotify, I have to put it under Hip-Hop, Rap. But I don’t feel like that’s accurate.  It’s more Alternative Rap. I mix the stuff that I like. I like grindcore, and black metal, and dark underground rap. Like 3-6 Mafia or Bone Thugz type stuff. I mean, it’s not rap by today’s standards, but I also have some mundane type of stuff.
100WW: Tell us about the hair.
GM: I kind of just wanted to look like my Final Fantasy character. His hair is white though, but I tried to get it as close to that as I could. I don’t know what happened. 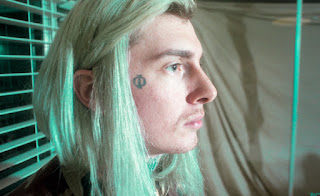 100WW: It looks white in the video.
GM: Yeah, it changes. I swear it changes. I tried using that purple conditioner that you’re supposed to use. It dried the shit outta my hair. Like scarecrow hair. It was literally, like I just want to shave my head, it was terrible. I’ll probably just dye it again.
100WW: Are you an art appreciator?
GM: I don’t get art.
100WW: Some would argue what you do is art.
GM: Oh yeah, I mean, Yeah. I just can’t do art with paint.
100WW: What is your favorite video game?

I am not the best a segues (i was nervous), but for what it’s worth, video games can be works of art. Not to mention Ghostemane brought up a video game when asked about his hair.

GM: I just got done playing Fallout 4 for the second time. I decided to join the Minute Men this time, and destroy the institute, because I joined the Institute the first time… I’ve been playing The Elder Scrolls online a little bit, but I’m gonna buy Final Fantasy XV and then probably not make anything for another 2 months.
100WW: Going on hiatus?
GM: No, not literally. I was finishing my last album while I was playing Fallout 4, and it was ridiculously hard to do. I don’t know, I kept getting distracted. [laughes]
100WW: When did your album come out?
GM: I finished it a month ago*, but I dropped another one the 14th, which happened to be the night of the super moon, and I didn’t find out till the next day.
100WW: Do you have a philosophy on life? 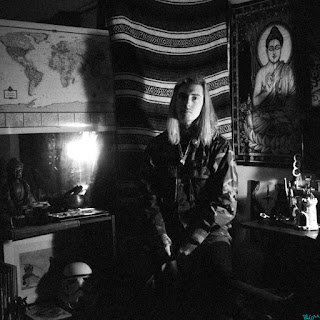 GM: I read a lot of different shit. I’m really into Hermeticism and different Occult topics, really. The universe is an ongoing process… You can look up Hermetica. It’s sort of a predecessor to Christianity. If you were to get into it… I’m reading the Corpus Hermeticum. Which is the original scriptures, I guess. A lot of it is similar to the Bible, and you can see where they took from that. Religion is kind of like the same story rewritten over and over. I’m really into it though, I’m into different religions. It’s cool to study, from an educational standpoint, as opposed to “I’m gonna live my life by this” standpoint.
100WW: What Black Metal bands are you into?
GM: Just the older stuff. Like the first and second wave. Like, Quorthon and Bathory. I guess Venom is credited with being the first black metal band, but they kinda suck. I don’t really like their music. I mean, I like newer stuff like Young And In The Way; they’re probably my favorite one, but they’re post-2000s.  A lot of modern Black Metal is really cheesy. The videos are just so overboard. Satanic shit or whatever. It’s hard to get into… The only modern straight-up black metal band that I think is actually really good is Gorgoroth, but everyone likes Gorgoroth.
100WW: Where do you find that you’re most popular?
GM: Technically, US is number one I guess, but Russia, and New Zealand.
100WW: So you’re known worldwide.
GM: Russia, New Zealand, and Australia too, are really loyal fans. Russia has this site called vk.com, it’s kind of like the Russian Facebook. People follow me over there and other people in my genre too. I guess that sound is just big over there. I’d love to go to Russia one day.
100WW: So you have not toured in Russia?
GM: No. I’ve barely toured here.
100WW: Where HAVE you toured?
GM: Texas, Denver, Portland, Arizona. I’ve played in New Jersey a couple months ago. The east coast is kind of dead for this sound, but they’re starting to get into it.
100WW: So you haven’t toured in Florida?
GM: Obviously I’ve played there. But yeah, they’re still behind. I obviously grew up and played shows there, but all the shows I played there were dead. Even if I played there now, it probably wouldn’t be as good as like here. They know me personally there, so they don’t take me seriously, I think.  Whereas everywhere else, is like, they’re my fans.
100WW: I’m from Florida and I take you seriously. :]  Do you have any tour stories?
GM: The first thing that comes to mind that isn’t really that crazy, but something that I never knew before is when we drove thru Arizona, I didn’t know there was such a thing as hot wind. Dude, I mean, even if it’s hot out in Florida, and you’re driving, you can stick your hand out the window and there’s a breeze. Cold air blows on your hand. In Arizona I did that and it was just hot as shit! Like, the window was hot, the AC was on full-blast, and I was just melting!

We talk for a moment about not keeping the AC on in extreme heat. Sometimes you have to do it.

100WW: Do you like It’s Always Sunny in Philadelphia?

GM: Yeah, it’s one of the only shows I like.
100WW: What’s your favorite episode?
GM: The wrestling one, where they wrestle for the troops. That’s my favorite.

100WW: Is that the one with Trash Man?
GM: Yeah!
[laughter]
GM: I love their stupid song. I found an “It’s Always Sunny” shirt with the birds of war on it. Like what the fuck!?
GM: I don’t watch a whole lot of TV. I just watch a lot of documentaries and stuff, but I like that show, and Trailer Park Boys. I’m kind of addicted to Trailer Park Boys. I feel so dumb for loving that show and watching as much as I do. I’ll be 4 episodes deep in one night and be like “What the fuck am I doing?” This is nothing! This is like, greasy shit, but it’s so good, I can’t get enough of it! My best friend’s Canadian, and he put me onto it. He’s been watching since it came out back when he was in middle school. Americans just got put on to it recently, because Netflix bought it.
100WW: Have you heard of SwearNet?
GM: Yeah. That’s the only Trailer Park Boys movie I’ve seen.
100WW: Have you been to the site? They have more shows and stuff there.
GM: No, that sounds awesome, I’ll have to check that out. I only saw the movie, and I thought the movie was good because they’re out of character the whole time. Like, Bubbles wasn’t bubbles.
100WW: Going back a bit, what kind of documentaries do you watch?
GM: When I watch documentaries, I watch the most boring shit possible. Like I’m taking about whispering narrators while watching animals evolve and eat each other and shit. Like Planet Earth and shit.
100WW: Those are good for mushroom trips.
GM: Oh yeah, for sure. It started where I enjoyed them when I was high, and then I realized it was cool sober.
100WW: They’re good sober. But, yeah.
GM: About six months ago I watched the Cosmos series with Neil DeGrasse Tyson, and that put me onto Space and Astro-physics in general and I’ve been obsessed. Kind of learning my own way until I can go to school again.
100WW: Cosmos is fuckin good.

I do, btw, encourage you to watch Cosmos. 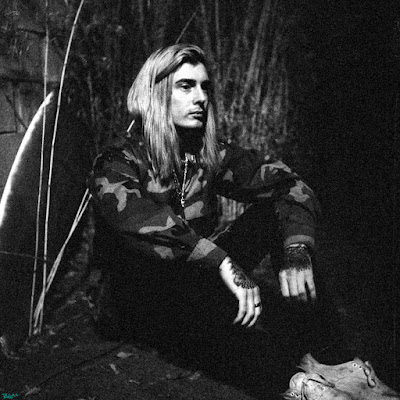