Hail to the Queen! The Barb Wire Dolls Interview 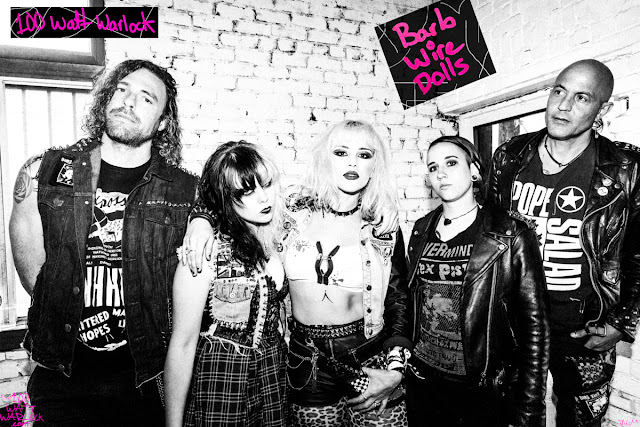 It was a semi-cool evening on the Sunset Strip.  We were outside the Whisky A Go-Go waiting to meet Pyn, lead guitarist for Barb Wire Dolls. The sign on the door says they’ll be playing at 9:30 sharp but we will find out later that it will be more like 10:00. We find him when he steps outside for a cigarette. He takes us inside and up the stairs and backstage where we meet the rest of the band. There’s a couch, some recliners and a mini fridge with waters by the door. On the opposite side, a television and VCR with plenty of VHS tapes next to it (I was tempted to grab Clueless for myself, hehehee). Anyway, where was I? Oh yeah, this is where we will spend the next fifteen minutes getting to know Isis Queen, Pyn, Remington, Krash, and Iriel Blaque, aka Barb Wire Dolls.

Where did you get the name Barb Wire Dolls?

How did you get your start?

IQ: We come from an artist commune from the island of Crete, Greece that’s up in the mountains. Me and Pyn formed the band together because I wanted to start a band but never sang before, never done anything musical before. So starting a punk rock band would be the perfect option. We did that and slowly things came together. We met Krash, our drummer in Athens and the rest is history! 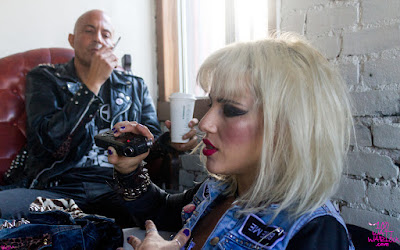 What is your experience as a woman in a male-dominated scene?

IQ: I don’t know about “Male-Dominated” there’s just as many women out there in the scene as there are men, but men can be a lot more aggressive when it comes to letting out their emotions and so they tend to be the stronger force at a show. I think being a woman is a great thing to be in a scene like the punk rock scene because we bring something new to the table and that’s what punk rock needs: something new to revitalize it. If everything is the same, all the bands sound the same, if they’re all talking about the same things and they all look the same, then it’s not punk rock. That’s just boring, generic crap that can be done in any genre.

Do you have any hobbies?

Iriel Blaque (Bass): I think we all surf.

Krash (Drums): So we all surf, right? We travel a lot while we tour so we’re touring, we’re playing a lot of shows. Music has pretty much taken over most of our time. You know, writing new albums, writing new songs, recording, touring, and IF we get some time off we go surfing.

What is the farthest you’ve toured?

IQ: Well, we’ve done twenty five countries from around the world. So depending on where you’re at, the destination could be very far. We’ve done pretty much all of Europe and we’ve done the US at least six or seven times around. Our longest tour was two and a half years.

Pyn (Lead Guitar): The longest distance is America because coming from Greece, we are actually the first Greek Rock band to ever play in America, and that was 2010, December 18th, our debut show in America. There have been a few metal bands and of course pop artists, but never a rock genre or punk band. So back in Greece it’s echoed out and since then we’ve brought another band from Greece here before playground circus a few other acts have come… …I don’t know what they’re called. So America’s kind of the place. 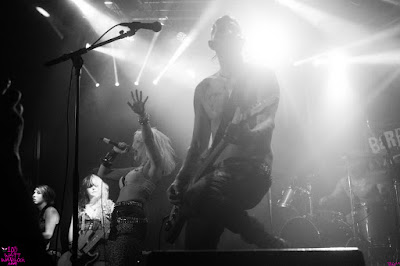 Being that you’re from Greece, how did you come to play a residency at The Whisky in LA?

IQ: We came to LA because we were invited by Rodney Bingenheimer who is a legendary rock DJ on KROQ. Rodney on the Roq. He was playing our demo and invited us to play the US and our first show in the US was at the Roxy Theater here on the Sunset Strip. After passing out thousands of flyers because we didn’t know anyone in LA, we didn’t have a crowd. We were just starting out as a band. We ended up selling out the Roxy Theater based on flyers. After that… We pretty much played the whole Sunset Strip we did residencies at On The Rocks, which is the petite label for Roxy Theater we did the Viper Room. We did many residencies there. The Whiskey was the biggest one on the strip so that came last and we’ve been here ever since.

I heard you were recording an album. Is this true? What can we expect?

Pyn: Yeah, we went and recorded at Rancho De La Luna; it’s in the Joshua Tree Desert. It’s owned by Dave Catching, the guitarist of Eagles of Death Metal. We met him at Riot Fest two years ago and became friends with him and Jessie, and he invited us to record at Ranch De La Luna which is a very… He only invites people to go out there. He’s had Queens of the Stone Age there, Foo Fighters, Arctic Monkeys, Iggy Pop just did an album there. PJ Harvey. It’s a really eclectic, crazy place. So we went and did our album there. Mixed with Jay Bombgard and our producer. From Energy Studios in North Hollywood. It should be coming out soon.

Does it have a title?

Pyn: We don’t know yet. We better wait.

How did being signed by Lemmy happen? 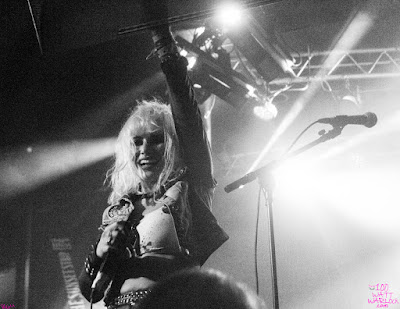 Krash: Just playing on the strip. He came and saw us when we first came here. Isis actually bumped into him on the strip in the first week we were here in the states and gave him a demo, he came and saw us play a bunch of times and he really liked us he talked about us to all of his friends and all these people that he knows. We weren’t really sure what his intentions were, but then we started hearing from other people that knew him that he was talking good stuff about us. Then eventually his management came and approached us and wanted to take over and manage us and get us signed to Motörhead Music. That’s kind of how that happened. A little bit shortly after we started, the ball started rolling and that’s when he passed away. We weren’t sure how this was gonna evolve, if the label was gonna still go on, but everyone behind the label knew that this was his wish. He really wanted to create a label and start a market with his bands, any new bands that inspired him. He was very passionate about it. It was something very important to continue and pass on the torch to a new generation of bands. We were super stoked that he saw this in us. That’s where we’re at right now. We’re gonna release our second album with Motörhead Music and continue on the Lemmy Legacy.

What is the weirdest thing you’ve ever seen while performing? 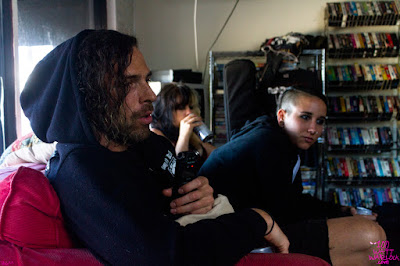 Remington (Rhythm Guitar): They bounced between us for a good while.

Pyn: I was kicking guys off the stage as hard as I could and they would still just be like ‘cool’ and try to get back on stage and I’d say ‘no, you can’t get on stage!’

Remington: By the front of my shirt, I got yanked off stage to the one chick who then followed me to three or four other shows, she showed up all across the country. This was all in Czech.

There was a girl that followed you around?

Remington: Yes. She pulled me off the stage by my shirt, and preceded to come to three or four other shows of ours, and would just show up and try to get backstage and would get me cigarettes from random people as a peace offering I guess.

Krash: Yeah, Czech Republic. They get the award for most interesting fans. 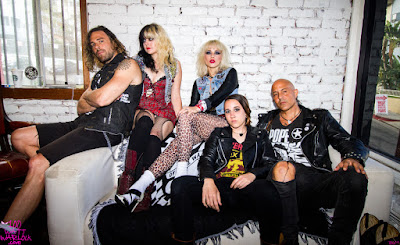 Remington: I’m partial to New York pizza, but pretty much anything with vegetables on it and I’ll be happy.

Pyn: There’s a whole new scene out there, a whole new movement. Because all the legendary bands from the 70s and 80s all got back together about ten years ago and started reforming. Doing the ‘glory days nostalgia’ tour which has come all over the world and it’s kind of given a chance for the underground to start building up and right now there’s a whole new movement. It seems like wherever we go, wherever we tour they seem to put on girl-fronted bands to open for us which is great because we get to see all these girl-fronted bands, and we’ve probably seen two hundred of them around the world. It seems like this female-fronted thing is becoming a movement. Especially with what’s happening with trump and the feminists standing up for their rights. So I wanted to plug all the bands out there that have girls standing up and playing music and being true to their selves and their art. Don’t give up, because the only way you get anywhere is if you do it. Rock on. And Svetlanas rock!

Later that evening, the Barb Wire Dolls performed (at about 10:00) and they did NOT disappoint!

Barb Wire Dolls will be on Warped Tour (all dates)

You can find Barb Wire Dolls on these Social Media platforms!