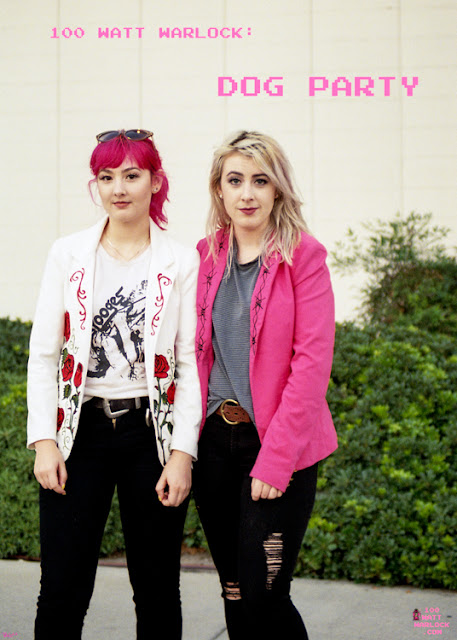 I met with Dog Party outside of some skate shop where they were about to perform.  The shop was small and I was in disbelief they could hold a show here, they later proved they could.  I felt bad for not getting them pizza, so I offered my hand to help set up.  That’s right, friends, I was a roadie for a day.  When I met Dog Party, I thought they looked like two well-dressed scallywags.  With no benches, tables, or chairs, we conducted the interview in the alley next to a dumpster.  I’m sure this is the last place they had imagined to be interviewed!  Dog Party got their name from watching their pug dance wildly around the room while they play music for him.  So innocent; so pure.

How would you describe your sound?

Gwen (Guitar, Vocals): I like to loosely describe it as good, fun rock and roll with a little twist of punk and a dash of pop.

I understand that in the past, your parents used to tour with you. Now that you’re 19 and 21, I imagine that’s changed. Do they still tour with you?

G: Since she turned 18, she became an adult.

Lucy (Drums, Vocals): I did become an adult. So I can sign for things now, without a guardian.

G: There was a time on tour…

L: We had to get a form notarized and sent to a venue so I could play there. [Laughs] It was kinda weird.

Do you miss touring with your parents?

L: We tour with one of them usually. Like our mom would come.  It’s nice having her.  We started touring when I was 12 and [Gwen] was 14.  We were very young.  I was in middle school; I was in 7th grade. It was nice some sometimes.  Sometimes it could get a  little annoying, but all in all it was a good time.

L: Yeah, they’re very supportive and it’s just like, our mother was with us for a period of time, and now it’s a new period of time. It’s not necessarily like we miss it, because we had and it was great.  It’s just new.

G: And also as you’re older, touring takes its toll you know? Sleeping on people’s floors isn’t the easiest thing to do.

L: It was hard on my poor mother, our mother.

Is there a song or album you’re most proud of? 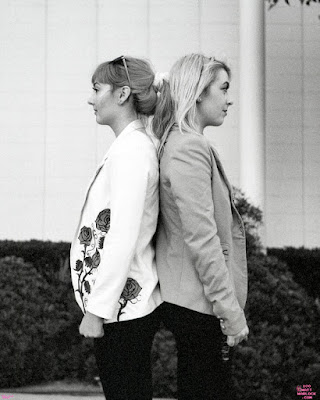 L: Definitely as the albums progressed, each of them was different and they have different things.  They show a story of our lives, and I think the latest one is typically the best.

G: Yeah, ‘cause we’re growing as people and our sound is developing.

Do you have a favorite movie?

L: I love Inglourious Basterds by Quentin Tarantino.  Any Tarantino film is really awesome.  They can get pretty intense sometimes, but they’re just great overall.

G: I like that one; I like Spirited Away. It always has a special place in my heart.

L: YES!  [My Neighbor] Totoro and Spirited Away.  I remember watching that when I was 6 and I was so scared.  Spirited Away was frightening, but I love it! It was like I wanted to look away at the part with the pigs, but at the same time I was like “Yes, this is cool!”

Do you have a favorite show that you’ve played?

L: YES! My favorite show I’ve ever played was in Berkeley at the UC Theater. We opened for Green Day on their Revolution Radio Tour.  It was really awesome because it was a SMALL venue for the tour.  It was like 1,500 people and it was more intimate and the venue was laid out in a certain way where you could really only see the floor and it looked like a regular show.  It looked like there were maybe 80 people there and it was like yes, this is what I’m used to doing!

G: And we were just on it that night…

L: The set was perfect.

G: So many of our friends were there.

L: Our friends were there.  Family was there.  It was just great to have them all see the experience and monumental thing we got to do.

Did you have a “Fuck yes” moment? Like “Fuck yes, this is awesome! This is worth it!”

L: Yeah, every night when we play. Literally, I’ll be playing and I’ll be like “YEEEESSSS!!” but definitely it was like we recorded a record and we spent a whole week on it and it was just tireless like 12 to 12 like GO! On! On! On!

G: It was just really stressful leading up to it.

G: Originally we were gonna record in winter, and then it was “JK! We’re recording in June-July! Let’s do this!” and I’m just “Oh my!”

L: The day after that session ended, we played a show and it was like “YESSSSSS!!” This is why I do it.  All that work in the studio is hard and tiring, but it’s worth it.

I have read you like to ski.  Can you tell us about that? 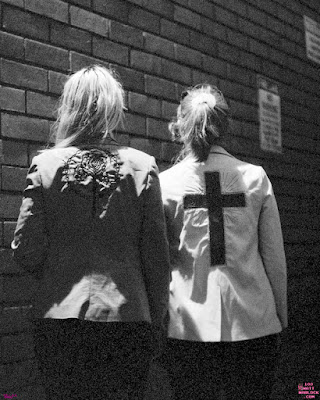 G: We grew up ski racing.  We ski raced for 11 years up in Tahoe.  Our mom owns a ski shop with her two brothers.

L: Family run business.  Skiing has just been a part of our lives.

G: Ski racing is mostly slalom / giant slalom races.  Like with the poles with flags and you ski around them.

Have you ever seen Frozen (Not the Disney movie)?

G: Oh, the one with the chairlift?

G: No.  Infamous though, they always talk about it.  The kids on Ski Team “Oh there’s this movie, you should watch it!”  When we get stuck on a chairlift, they bring it up and it’s like NOPE! Not gonna watch it!  I still have bad dreams about falling off chairlifts.  But it would definitely make it worse!... One of the guys [in the movie] jumped down and the bone broke and it was sticking through, right?  I haven’t even seen it and I know all this stuff, and the wolves!

Gwen, I heard you’re studying Graphic Communications.  It got me wondering if you did the logo on the drum.

G: I did not design that.  A guy named Brian Opsal did.

Do you know when you’re going to graduate?  How is college going?

How are you balancing college and touring? 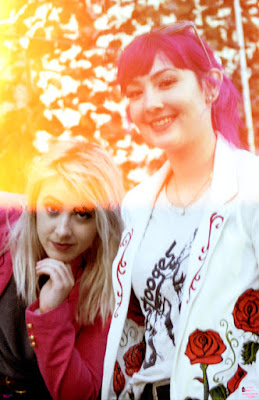 G: I had to miss a lot of school for the Green Day tour.  [Lucy] didn’t have to miss AS MUCH, but it’s still, you know.  I go to Cal Polly, San Luis Obispo.  Graphic Communication with a Minor in Web and Digital Media, and a Minor in Psychology.  A mouthful but it’s pretty fun.

L: I missed a quarter of a quarter, which is a lot! I’m going to college, I go to Cal State Long Beach, I study Studio Art.

G: She’s on the quarter system; I’m on semesters. I did miss a lot of class.  I’m in the honors program; we’re both exceptional students. We put the effort in.  It was hard.  It was really hard, but we did it.  You just really have to put your head in the game and you have to WANT to do well.

L:  The Green Day tour wasn’t so much an obstacle for me in school.  It was more this past spring.  It was doing bookings while trying to focus on my classes, that was the most stressful.

G: It’s always around.  Especially when we play at a bar.  There’s always drunk guys.  Always the comment “You’re pretty good for a girl”.  The other day I was on Instagram and someone said “My favorite girl band”.  Dude, we’re A BAND.  If you said that about a band with all guys in it, you don’t really say that.

G: Yeah. It’s still around. We’re still young, too.  So the whole not taken serious part is always frustrating.

Are you fans of any television shows?

G: Yes. I think mutually we both love Stranger Things on Netflix.

L: That was awesome, yes. 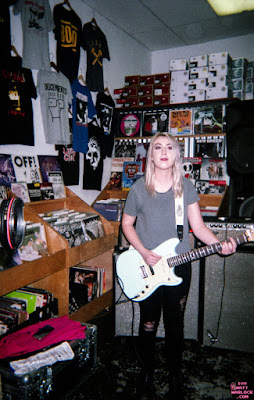 G: Episode 1, we are gonna start.  We pumped the breaks a little on tour, we didn’t get to watch any.  I love spooky things.  American Horror Story is really great.  Although the last season kinda made me have sleep paralysis pretty bad.

G: Nope, not a fan of scary movies.

G: movies are just in there to scare you, but television has a deeper meaning.  There’s more to the story.  It’s not just hollow scariness. It’s dense.  TV shows are dense, man!

G: Also, I love Workaholics! Workaholics, and Broad City!  We started watching Broad City in the van with everybody. Cos the members in Sneeze Attack don’t really care for Bates Motel too much, but we all watch Broad City and we crank it up!

G: Girl Boss is alright. We just watched the mini documentary series The Defiant Ones. Which is about Dr. Dre and Jimmy Ivine it was pretty cool, very insightful on the music industry.

Are you sad Workaholics ended?

G: Yeah, but they’re making a movie, which I have high hopes for and maybe they’ll make a second movie and a third movie.  Those probably wouldn’t be as good, but I love Blake Anderson. He’s the real homie.  I want him to be in more things.

Have you seen DOPE?

G: I should watch it.

What did you write Lost Control about?

G: We wrote it about our dog, Terrance. He’s a pug and he’s super cute. When he gets excited, he runs really fast with his butt lowered to the ground and his tail goes straight.
G: We recorded two records last month that should be coming out in the springtime. 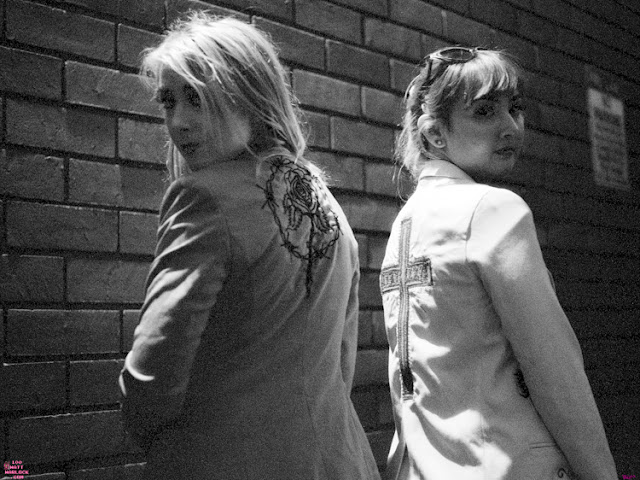 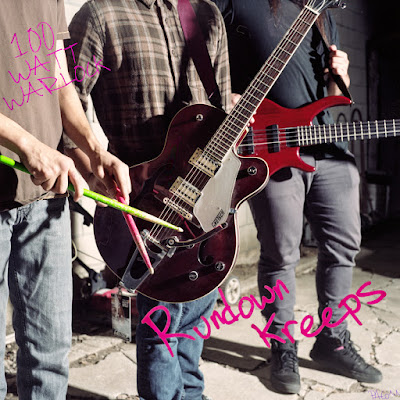