Auxiliö, From the Beer Can! 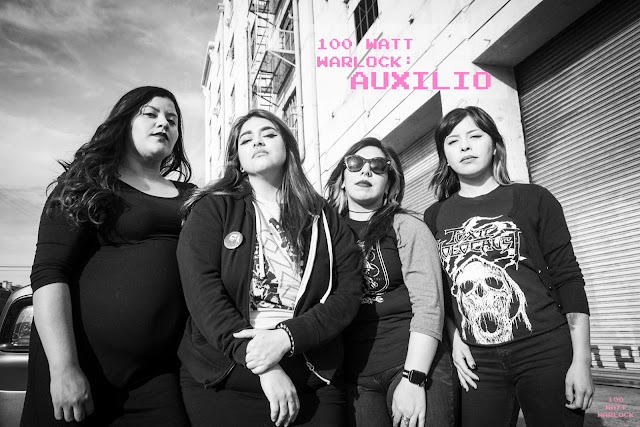 While sitting in the Carl's Jr. parking lot, I was nervous about meeting Auxiliö. Their music is hard hitting and fucking brutal to say the least. I thought I was about to meet some intimidating ladies! Instead, I met a bunch of giggly, happy-go-lucky musicians! We caught Auxiliö in the studio, recording a track for a compilation from Raw War Records, coming out this spring.  What follows is a silly interview that had me laughing more than I've laughed in my short career so far.  Enjoy!


How did the band get started?

[Motions to Krisma and Christina] 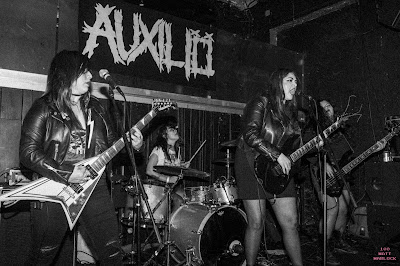 Krisma (Vocalist and Guitar Player): I pretty much hit up Christina [to see if she] wanted to jam out. We weren’t really trying to start a band, it just happened. She came down and we started jamming out, and [it] just kinda happened that way.

Christina (Drums): She was in another band in LA while I was in another band in Oxnard and those bands fell apart, Krisma saw me performing at a backyard show and contacted me through Instagram asking if I was still drumming. I said yeah, but that I was in a project. I thought, "Oh my god! I’m scared to meet up with her!  Because she’s kind of intimidating" and that’s the honest truth! I texted my friend “I’m gonna be at this address. I’m supposed to meet up with this girl and I’m really fucking scared!”

C:(continued) I’m gonna get beat up or something. Anyway, I showed up and it was really cool. We drank some beers and jammed. 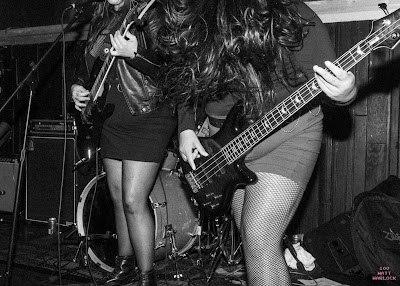 K: And we had tacos!

C: And that was pretty much the beginning. We were like “This is
really fun, let’s keep doing this!”… We found a bassist, we lost a few members. We were actually a five-piece in the beginning, and now it’s us!

K: THIS IS US, Except for Belen, our temporary bassist. She is a godsend! It’s really cool that she came out and did this for us.

How did you land on the name?

You’re a newer band, and you’re already playing big name shows/festivals already. What has it been like for you? 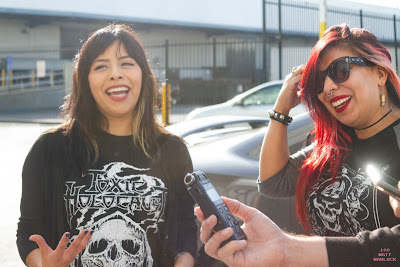 C: Also we put in a lot of work. We’re willing to travel, and travel to each other just to have these practices.

You recently had your band featured on a beer can.  How did that come about?

C: That’s in Oxnard, Casa Agria, they’re the shit! Go there and have their beer you’re ever in Oxnard. You won’t be disappointed! – I sound like an infomercial now! (Sponsor me) No just kidding!  Our friend Josh, who plays in Fist Fight on Ecstasy, asked us if we wanted to be a part of it, [He] thought it’d be really cool. So they put us on there, and we played a show there when they released the can. It was really cool. 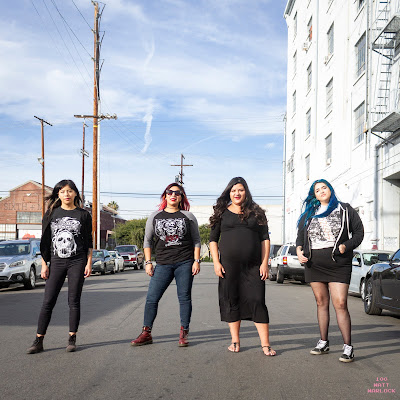 [All laughing over each other]

B: We almost got kidnapped in Peru! Some dude tried to break into our van! We had to kick him out like “GO!”  We were in a really sketchy part of town – really ghetto.

C: It was crazy.  People were jumping on cars. It was insane.

[Everyone talks over each other in excitement]

K: … Somebody asked me for my organs.

A: She was an organ donor!

C: Well at C.Y. Fest, Kris put the guy trying to steal our [stuff] in a choke hold! 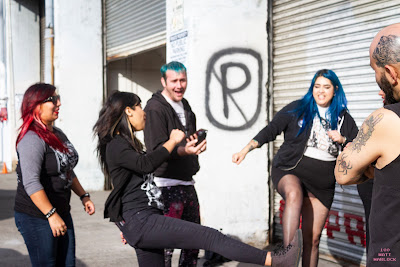 B: Oh yeah, some guy ran by our merch table and stole our CDs… Krisma chased him and put him in a choke-hold!

C: She grabbed the CD and was like “Get the fuck outta here!”

B: In hindsight we were really flattered that he legit wanted our music that hard.

A: The security guard gave you props!

K: I was trained for that.

[These ladies are incorrigible] 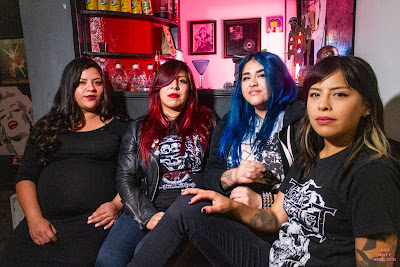 B: I work at a Doctor’s office.

A: I work in a little cubicle. I type stuff… Wack.

What is a movie or a book that has changed your life?

B: Dumb and Dumber.

A: Napoleon Dynamite in Spanish!

C: Ace Ventura, he fights for the animals!

B: We’re all about animals; we lost some pets last year. 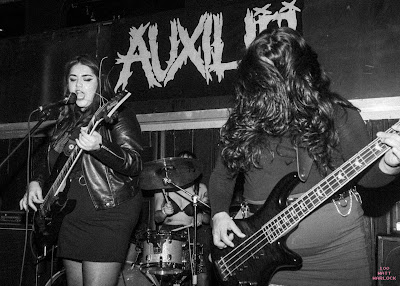 K: Teleporting. Because then I’d be here in a second, and I hate driving back and forth

A: That’s a good one, but can you teleport your shit with you?

K: Just gotta touch it. I’ll sit on some and hold the rest!

A: I would say invisibility, because then I could get anywhere for free.

B: You wouldn’t have to wear clothes. 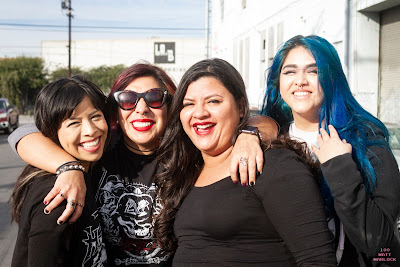 K: Kill a lot of people.

A: I’m going to change the world!

C: I just discovered it; I used to hate it, but pineapple and pepperoni is really good. 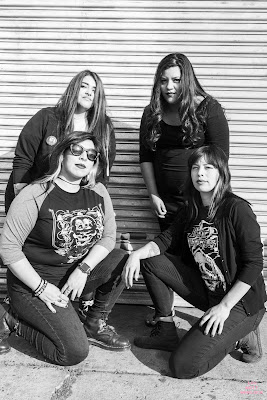 B: Regular pepperoni and jalapeno.

C: I ate vegan pizza and I ate that shit up! 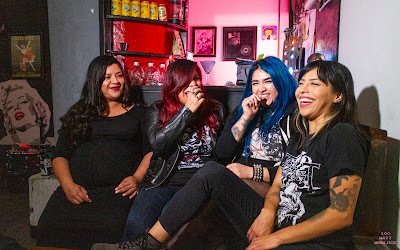 Where do you see yourself in 5 years?


K: Still playing music, for sure. 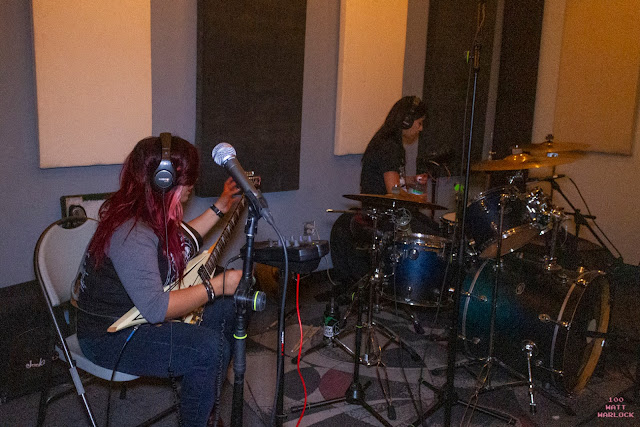 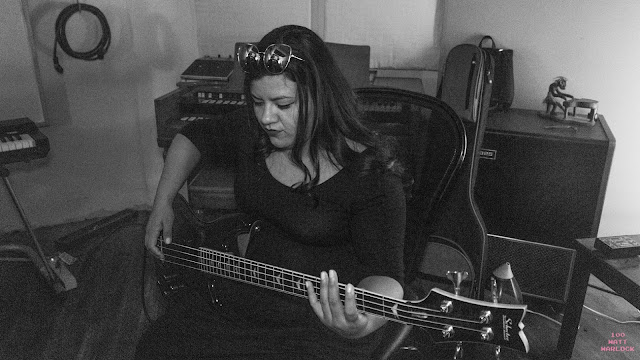 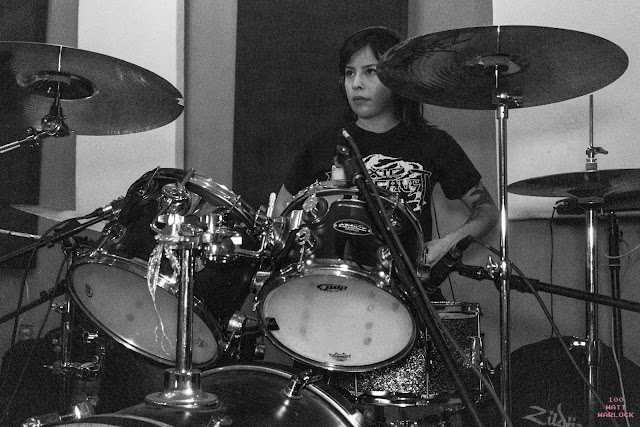 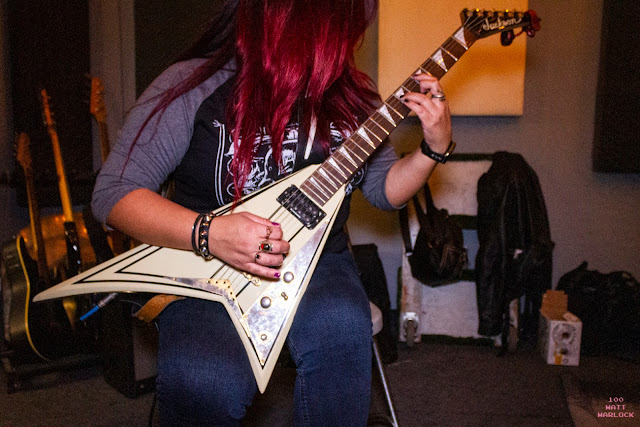 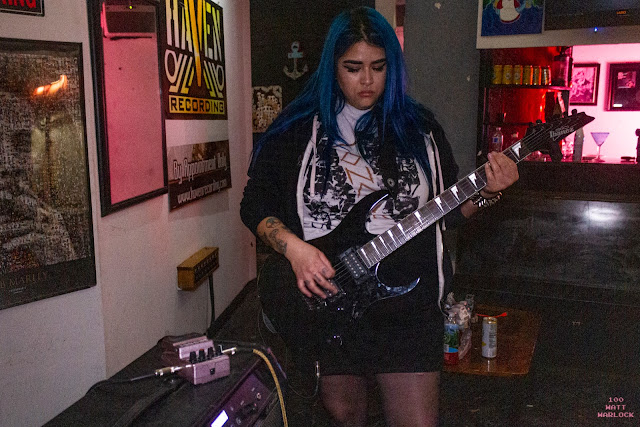 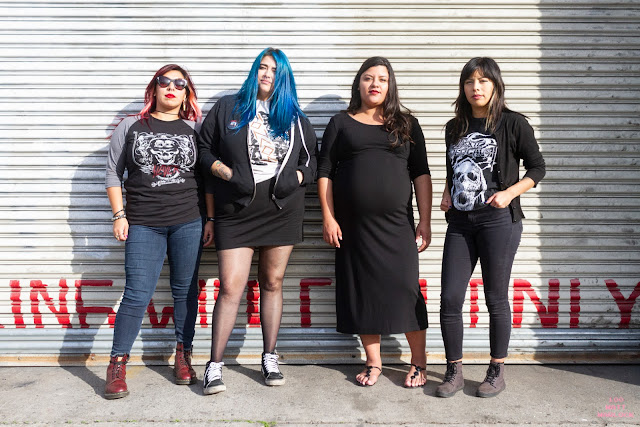 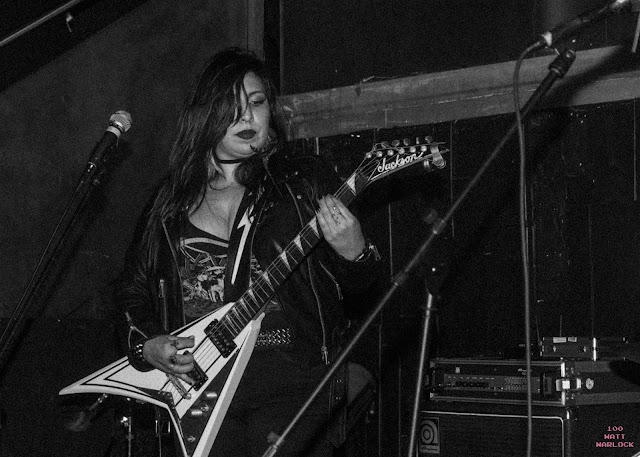 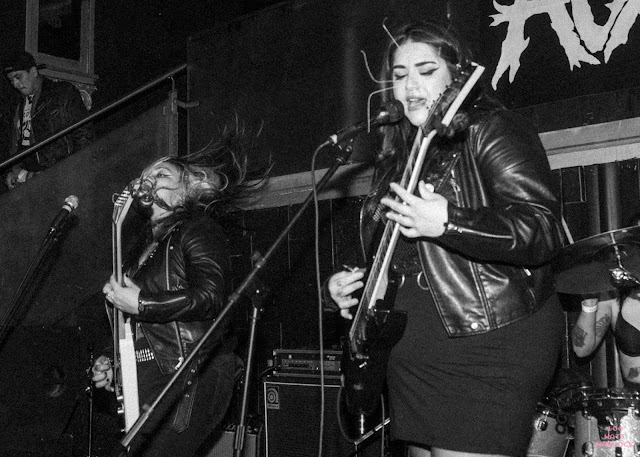 Auxiliö will be on tour in May